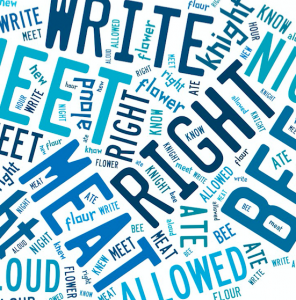 I confess I have a phobia about homophones.  You know, those tricky words that sound the same, but are spelled differently and have different meanings.

Mixing homophones is one of the most common errors in student writing at every level. It’s not that our kids don’t know how to spell the words.  It’s that they don’t know which word to spell.  So when a student writes a sentence like “The army went fourth in battle,”  she doesn’t likely mean that there were three other armies ahead of them.

But the good news is that students only need to come up with a memory trick for one of the words.  Then they can figure out whether it’s that word or the other, by default.

For example, let’s say a student wants to write the sentence, “I ___________ in amazement at the strange creature.” He has to decide whether to use stare or stair. He’s taught himself the “trick” that “you climb a stair into the air.”  So now he asks himself, is the word I need the kind of stair you climb into the air?  No, it’s not; then it must be the other kind of stare.

Memory tricks, or mnemonics, are fun for students to create – and the students are more likely to remember them. For some examples, go to the HIP Teacher Page. 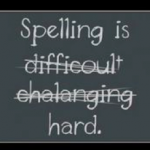 What really matters in Spelling instruction?Support for Struggling Readers 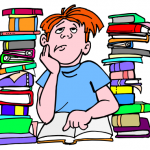